*Please note that there is no charge for attendance.

The Internet is generally regarded as an important vehicle for the diffusion of democratic principles, global thinking and equality. However it also embodies a ‘dark side’ which is not widely understood.

Focusing on extreme-right organisations in six Western Democracies (Italy, Spain, France, Great Britain, Germany and the USA), this presentation addresses the political use of the Internet by extremist groups and its potential impact on identity formation, organizational contacts, and mobilization. Whereas these phenomena are well-known and studied concerning left-wing social movements, so far scarce scientific attention has been devoted to the extreme right and the internet. Through a formalized comparative web content analysis of 250 organizational web sites, I will show that different forms of political activism on the Web by right wing groups are indeed on the rise, with the use of the Internet for diffusing propaganda, political information, promoting cyber community of debate, recruit new members, organizing political mobilisation, and cross-borders contacts. The analysis includes different types of extreme right organizations, from political parties to neo-nazi and youth skinhead groups. The presentation also shows that different types of groups use the Internet for different functions and purposes. In addition it relies to the available political opportunities and cultural traditions of the respective countries in accounting for differences in the degree and forms of online right wing political activism emerged. 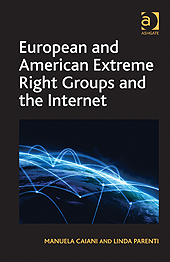 Manuela Caiani is Associate professor at the Scuola Normale Superiore of Pisa-Florence, where she teaches comparative politics and qualitative methods. She has worked on several comparative projects on contentious politics and European integration and right wing extremism in Europe and the USA, social movements and Europeanization and terrorism and political violence. She is currently involved on a project on the extreme right and the Internet financed by the Austrian National Bank (Austria) . Her main research interests concern social movements and collective action, Europeanization, right wing extremism. Manuela is the author, with Donatella della Porta, of Social Movements and Europeanisation (Oxford University Press, 2009), with Donatella della Porta and Claudius Wagemann, of Mobilizing on the Extreme Right (Oxford University Press, 2012) and, with Linda Parenti, European and American Extreme Right Groups and the Internet (Ashgate, 2013).

Lunch Briefing Series: The Ethics and Politics of Policing the Internet for Violent Extremist Content