The VOX-Pol Network of Excellence (NoE) is an EU-funded academic research network focused on researching the prevalence, contours, functions, and impacts of Violent Online Political Extremism and responses to it.

The inaugural VOX-Pol conference will be held at King’s College London on 28-29 August 2014, and will feature panels and papers describing and discussing cutting-edge research on violent extremism and the Internet, and addressing frontiers in social science methodologies for this research. The conference will include hands-on workshops on using free/open-source software packages for social network analysis, content analysis, and data collection.

There will be a half day ‘hands on’ workshop on research methods for scholars of violent online political extremism, held the in the afternoon of Wednesday 27th August, the day before the conference starts. Places to this workshop are limited so if you are interested in attending, please email conference@voxpol.eu for more details.

Manuela Caiani is Assistant Professor at the Institute for Advanced Studies (IHS) of Wien. After completing her Phd in Political Science, she has worked on several comparative projects on collective action and Europeanization and on right wing extremism. Her main research interests concern social movements and collective action, right wing extremism in Europe and the USA, Europeanization and the public sphere, political participation and the Internet. Among her recent publications are: L’Europeizzazione degli attori domestici: policy networks, mobilitazione e frames sull’Europa, Bonanno Editore, Roma, 2011; Mobilizing on the Extreme Right, Oxford, Oxford University Press, 2012; European and American Extreme Right Groups and the Internet, Ashgate 2013; Il Web Nero, Bologna, Il Mulino 2013. Watch Manuela Caiani’s keynote speech at the conference here:
Thomas Hegghammer is the Director of the Norwegian Defence Research Establishment (FFI) in Oslo. Having read Oriental Studies and Modern Middle Eastern Studies at the University of Oxford, Thomas received his doctorate in political science from the Institut d’Etudes Politigues in Paris in 2007 with a thesis entitled “Violent Islamism in Saudi Arabia, 1979-2006: The Power and Perils of Pan-Islamic Nationalism”. Thomas’s work can be broadly described as actor-centered research on Islamist militancy. In particular, he seeks to understand why al-Qaida emerged when it did and why it continues to attract recruits. Thomas has published widely on Islamist militancy, having wrote Jihad in Saudi Arabia (Cambridge 2010) and co-authored the Meccan Rebellion (Amal 2011) and Al-Qaida dans le text (Presses Universitaires de France, 2005). Thomas has also had articles published in journals such as the American Political Science Review, International Security, Journal of Peace Research, International Affairs, International Journal of Middle East Studies, British Journal of Middle Eastern Studies, The Middle East Journal, Middle East Policy, and Studies in Conflict and Terrorism. Watch Thomas Hegghammer’s keynote speech at the conference here:

The following topics are of particular interest:

We welcome papers or panel proposals in all these areas, particularly where they report significant new results. Innovative methodological papers are especially welcome.

Authors of individual papers should submit a 300-word abstract at our proposal submission page, https://www.easychair.org/conferences/?conf=vope2014 by 16 May 2014. Panel proposals should include a 200-word abstract and confirmed list of min. 3 panelists.   A selection of papers will be considered for publication in the journals Policy and Internet, and Perspectives on Terrorism.

The conference organisers are able to provide a number of travel grants for PhD students, early career researchers, end-users, and colleagues from the developing world. Support may be requested for registration fees, transportation, and accommodation. Further details will be provided when decisions are made on selected papers. 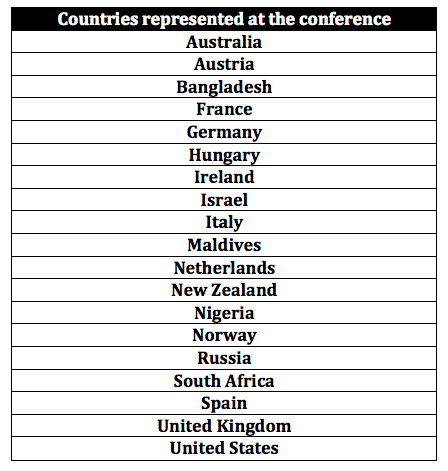