This article was originally published by the Danish Institute for International Studies (DIIS) on 10 November 2016.

Our democratic culture can act as a safeguard against radicalisation, if we make space in the public debate for counter-cultural movements and radical political projects.

In the confrontation with radicalism and political violence, democratic freedoms are often named the Achilles’ heel of an open society: freedom of expression encourages the spread of radical ideas, whilst freedom of congregation encourages the formation of radical groups and communities. However, these democratic freedoms can also be part of the solution. They can generate public debate, about the allegations and utopian ideas put forward by radical and anti-democratic movements. Democratic freedoms can beckon these movements out into public space and uncover the counter-cultural modus operandi. Even though political divisions often are irreconcilable and consensus hardly is a realistic ideal, the mere inclusion in the public debate, can inspire feelings of solidarity and shared responsibility for the community.

Democratisation instead of de-radicalisation

There are two dominant approaches to radical or anti-democratic movements and their online propaganda. These are either to combat them with sanctions and drive them out of the community, or to normalise and persuade them to see sense. Both approaches prevent a functional democratic public. Suppression and marginalisation only increase the resistance potential and escalate the conflict, and even in the parliamentary debate, the argument itself seldom wins (regardless how factually well founded it is). Instead, a compromise respecting the differences between the parties involved evokes parliamentary unity. The same recognition of the radical and anti-democratic other as a political adversary is necessary, if we are to prevent political violence. It should therefore be recognised that a lack of consensus and irreconcilable differences, are basic elements of democracy, not an expression of radicalisation.

Instead of democratic inclusion, current radicalisation prevention measures, place a greater pressure on normality. Typical youthful experimentation with identity (e.g. experiments with online radicalism) are increasingly regarded as an expression of early radicalisation, whereby disillusionment and deviation from the acclaimed ‘healthy’ normality, are haphazardly coupled to even the faintest trace of ideological otherness. This puts more pressure on normalisation (the concept of normality becomes narrower and is depoliticised) and moulds all citizens from the same (politically correct) cast. De-radicalisation thus potentially undermines the diversity of possible identities and the ways in which individuals can express themselves. This in turn, reinforces the hatred of the norm held by those who are excluded, as well as increases their resistance.

The radicalisation debate is haunted by two misconceptions. On the one hand, there is the mistaken assumption that we are all fundamentally the same, want the same things and have the same goals in life. On the other hand, the belief that we are all fundamentally different, divided by civilisation and culture, is also erroneous. The problem is that the first misconception belittles the political, whilst the second, essentialises it. In the first approach, the entire problem is addressed in terms of close social relationships and points to Danish middle class normality as the ‘good’, apolitical alternative. The second approach – which primarily focuses on radical Islam – either makes use of so-called moderate Imams to send messages into radical circles, or fundamentally criticises the religion and ideology, as these are considered the primary reason for the violence or as irreconcilable with Danish values. Both approaches remove the political subtleties and distinctions from the issue.

Counter-narratives and information campaigns constructed from these two misconceptions, risk creating messages that promote an apolitical, multicultural normality devoid of radicalism and social criticism, or messages containing claims of true knowledge about the state of the world and the correct meaning of religion/ideology. The first approach constructs idyllic postcards devoid of identification. The second approach is a direct provocation to those who fundamentally disagree with the assumptions, conditions, and descriptions of reality that the counter-messages are based on. Although unintentional, these messages risk appearing arrogant in the eyes of the recipient, and this merely exacerbates polarisation. Instead, accept actual political disagreement and support initiatives that make space for critical societal debate.

More voices in the debate

One alternative to normalisation or an identity-political cold war between ‘them’ and ‘us’, is to clarify and contextualise the multifaceted field of issues from which movements and counter-cultures are cultivated. This can be done by including the political and social criticisms from radical and anti-democratic movements, in the public debate. The public debate should re-establish relations of political antagonisms and welcome clashes of interest that otherwise, surreptitiously provoke negative feelings and create a will to violently pursue alternatives to the liberal democratic welfare state; rather than simply turning the challenges from radical and anti-democratic ideas and movements, into questions about sovereignty of the state, the truth about the state of the world, or normalisation of political deviants. In order to promote open democratic debate, we must break away from the notion that there is a 1:1 correlation between radical opinions and violent radical actions.

On the one hand, a democratic status quo is always maintained by violent means when the state exercises its legitimate monopoly on violence. On the other hand, it is possible to support social upheaval without directly challenging this monopoly. The openness of political opportunity structures – i.e. the state’s willingness to allow public access to the political decision-making processes and democratic debate on the grounds of such decisions – as well as the openness in the general public debate, will influence whether radical opposition is expressed within the democratic space or in the form of violence. Historically, Denmark has proactively relieved the pressure of democratic frustration through a high tolerance concerning freedom of expression. In the future, we should continue to have faith in our democratic openness rather than focusing on less freedom, more censorship and a stronger monopoly of opinion. 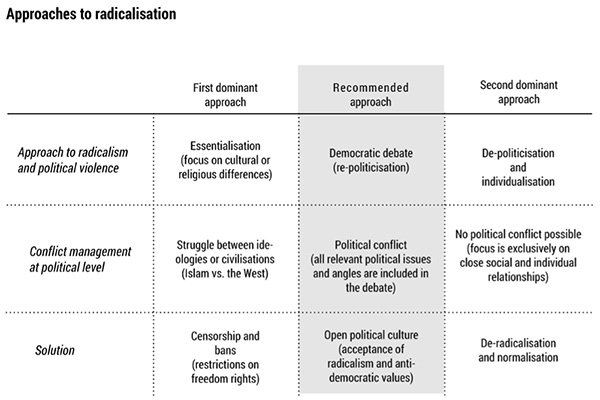 This brief recommends a better balance between the two dominant approaches to radicalisation.

Consequently, discard ideas of the ideological de-radicalisation of youngsters who have strayed from the ‘normal path’. This merely narrows society’s understanding of normality and reduces the space for non-violent counter-cultures. The success criterion for an effective prevention policy should not be normalisation; it should be the absence of political violence and crime, as well as greater democratic participation. Therefore, take radical opinions, frustrations, and criticisms seriously, make more space for lawful radical expression, and focus on combatting unlawful actions.

Information campaigns find it difficult to relate to the political complexity of radical criticisms. The saying, that people who live in glasshouses should not throw stones, should therefore act as a guide for all counter-narratives and campaigns. While accusing and reprimanding their counterparties for working with highly simplified descriptions of reality, Western propaganda often does exactly the same thing. A message aimed at stopping violent activism in conflict zones, risks missing its target, if the people sending the message are themselves engaged in violence (e.g. the Danish state and its participation in the war in Syria/Iraq).

The great discrepancy between what Western governments say they do and what they actually do, adds fuel to e.g. narratives of violent Islamist and Jihadi groups. The realpolitik realities of international relations play a pivotal role in online propaganda.

Politicians talk about democracy, peace and human rights, but their actions on the international stage, are based on diplomatic pragmatism prompting realpolitik compromises to secure their state interests. When politics necessitate unholy alliances with states such as Israel, Turkey or Saudi Arabia that violate human rights, officials and politicians should do more to justify the realpolitik discourse, instead of covering their policy with rhetorical frosting that denies this political reality. Therefore, openly address the dilemmas and compromises that are part of modern foreign and security policy. 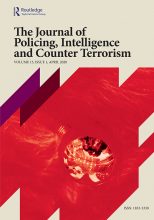