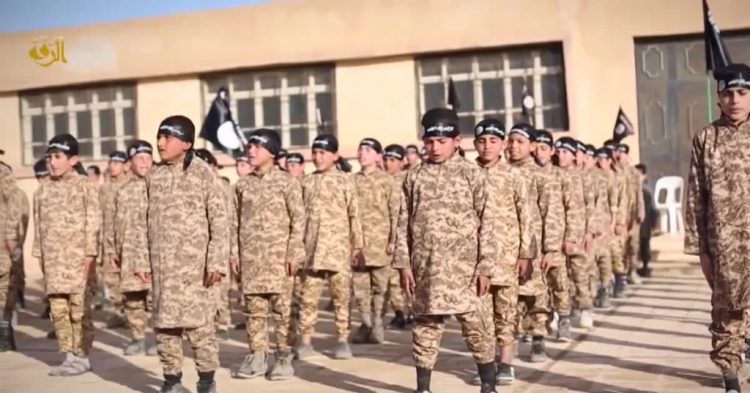 By Amy-Louise Watkin and Sean Looney

To involve children in terrorism is an unthinkable prospect. And yet they have become not only targets of violence, but are being used to promote radicalised causes too.

This is not just about European or American children being victims of attacks by the so-called Islamic State (IS). Young people who are victims of Western military attacks are being used as pawns in the fight against terrorism too.

Just look at US president Donald Trump’s disastrous first military operation. The January 29 raid on the village of al-Ghayil in Yemen saw 25 civilians killed, including nine children. While the White House has insisted that it obtained “valuable information” from the operation – which was intended to gather intelligence on al-Qaeda in the Arabian Peninsula (AQAP) – no evidence has been produced in support of this claim.

In addition, any evaluation of an operation’s success must also consider its secondary effects. In particular, how they supply groups like AQAP and IS with ammunition for their propaganda machines.

Propaganda is a huge part of how organisations like AQAP and IS motivate those looking to support them. AQAP in particular relies on social media and its online magazine, Inspire, to encourage readers to launch attacks. Children are used as tools of propaganda – the killing of children by Western bombings is repeatedly used to promote its cause. In its very first issue three explicit photographs of dead children were printed, and this method continued up to and including the most recent issue in November 2016.

The sole purpose of these disturbing images is to stir anger and frustration among both existing and potential sympathisers, in order to justify attacks on the West.

Just as AQAP publishes Inspire, IS produces two magazines, Dabiq and Rumiyah that are also distributed online and in multiple languages. Unlike AQAP, however, IS has started to move away from portrayals of children as victims of Western warfare, and now shows children as perpetrators of violence. So much so that the primary portrayal of children is now as “child soldiers”, with only occasional images of child “victims”.

But why this change in emphasis? There are at least two reasons, the first of which is psychological warfare. To fight, punish and even kill children involved in terrorism is at odds with the importance the West places on the protection of children from harm and exploitation. How could soldiers possibly fight back against young innocents? By promoting the idea to readers of the magazine, it encourages them to get their children involved in the cause, and help build a regiment of child soldiers that the world will not want to fight back against.

It is also a method of state-building. The use of child soldiers both in the magazine and in real life conveys that this is a cause every family member is prepared to fight for; that IS supporters are in this for the long-haul; and that the creation of soldiers from a young age will lead to the strongest and most brutal generation of fighters ever created.

There is one common cause to both AQAP and IS’s tactics: showing their children are, whether intended or not, completely enmeshed in the battle with the West, and are consequently being severely injured or killed.

The worrying question now is how much terrorist propaganda has convinced would-be terrorists that attacks on children in the West are a “justified” retaliation for the deaths of their own children. While there have been no explicit instructions in the propaganda magazines to attack children, the bodies of injured and vulnerable children which fill the pages of Inspire and Dabiq implicitly implore readers to take action.

The recent terror attack at the Ariana Grande concert in Manchester Arena is one that we believe deliberately targeted children to mirror what is happening to children in IS and al-Qaeda territory.

The attacker’s sister has also claimed that the intentions of the bombing were likely motivated by AQAP and IS propaganda. She told the Wall Street Journal: “I think he saw children – Muslim children – dying everywhere, and wanted revenge.”

Stopping this kind of propaganda will be no easy task: publishing online magazines on different file sharing sites and other platforms is difficult to contain.

The US government has identified messaging and counter-messaging as one of three priority areas in its 2016 strategic plan to tackle violent extremism. Meanwhile, the UK has its (widely lambasted) Prevent strategy aimed at countering violent extremism – a scheme which, it was recently announced could be expanded to give children as young as four anti-radicalisation lessons.

But extremist groups know the power of their propaganda, so it is essential that these counter-messages are carefully tailored because each group tells a different story.

Amy-Louise Watkin is a Research Coordinator, Project Officer and part-time PhD student at Swansea University. You can follow her on Twitter: @CTP_ALW

The article was originally posted on TheConversation.com on 27 June, 2017. Republished here under Creative Commons License.